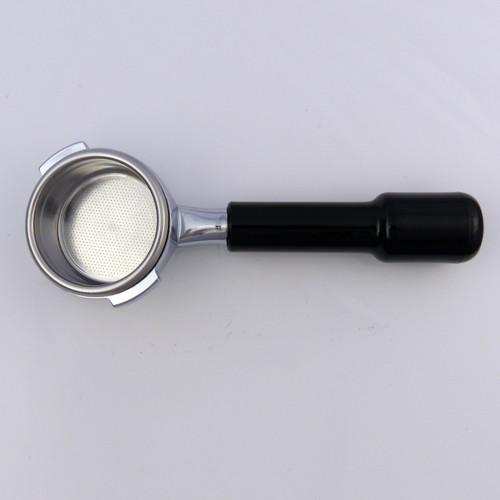 There is a relatively new phenomenon among coffee enthusiasts that is not only a great Barista training tool, but is also beautiful. It is commonly referred to as a Bottomless Portafilter.

Usually a bottomless portafilter is “chopped”, or cut off, so that the entire bottom is visible. This also allows the Barista in training to see the bottom of the portafilter basket, since this is where the coffee will start it’s journey into the little espresso cup. Furthermore this allows the espresso gourmet to extract the shot more hot into the cup since the espresso extract does not get funneled through the spout of a regular portafilter which is on less temperature than the espresso shot.

First some common terms without using a bottomless portafilter:

Extraction is the act of forcing hot water from the boiler though ground coffee, which in turn "extracts" flavors, oils, colloids, lipids and other elements that turn water into brewed coffee or espresso.

Crema is one of the sure signs of a properly brewed shot of espresso (in non crema-enhancing espresso machines) and is created by the dispersion of gases— air and carbon dioxide —in liquid at a high pressure. The liquid contains emulsified oils, and forms a dark golden brown layer resembling foam on top of an espresso shot.

Golden rule is a common phrase that describes the ideal extraction time and volume for an espresso. The Instituto Nationale Espresso Italiano provides a working definition of the characteristics of an ideal espresso, although I consider these parameters more "golden guidelines" than hard and fast rules. To keep it short: 14 grams of espresso coffeeg grind should extract a sixty milliliter double shot in 22 to 32 seconds (timing from the moment the pump starts).

Terms to tune your espresso by using a bottomless portafilter:

Blonding denotes the color transition of a pour from dark brown and tiger-striping to a light, uniform pale blond. This normally occurs in the last third of the pull and is a signal to end the pour. This overly-blond portion of an espresso is thin, nearly flavorless, and if allowed to continue too long, will dilute the body and taste characteristics of an otherwise enjoyable shot.

Channeling is the rapid passage of water through fractures in the coffee puck, which produces a thinner, under-extracted espresso. When it occurs, you'll often see sudden appearances of blond streaks in the stream of espresso; sometimes the puck will even have pencil lead-sized holes where channeling occurred.

Tiger striping and mottling are leading visual indicators of a good extraction. Tiger striping is formed by the contrast of darker and lighter crema in the espresso stream; ideally it begins early in the pour and is sustained through the end. Mottling is the in-cup confirmation of a good extraction; it is the darker brown speckling and reddish-brown splotches formed on the surface of the crema.

The Belle Époque or La Belle Époque was a period of Western European history. It is conventionally dated from the end of the Franco-Prussian War in 1871 to the outbreak of World War I...

The Pod Adapter Kit enables you to change your Simonelli espresso machine from using espresso ground to using E.S.E. pods. The ESE espresso coffee pod system is easy to use and enables you to make a...

Oscar II is the second generation of the "Oscar Professional" launched in the late nineties, which has conquered coffee lovers around the world. Oscar II is the professional espresso coffee machine...

Oscar II is the second generation of the "Oscar Professional" launched in the late nineties, which has conquered coffee lovers around the world. Oscar II is the professional espresso coffee machine...